I beg to feed despite risking my life for Nigeria, working under Buhari, Obasanjo, Gowon –Retired Capt. Monye 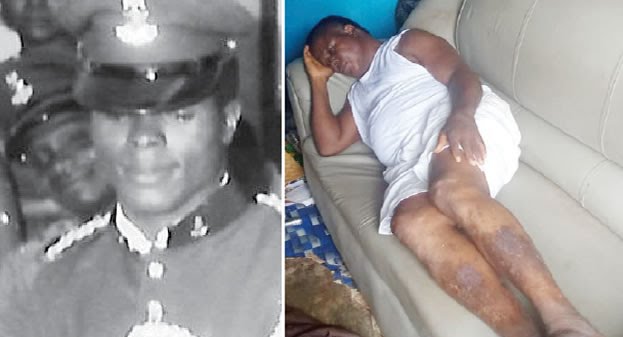 What was your service number in the army?

I am Capt. Amos Iyari Monye (retd.), with number NA/1239. I was born in 1944 to the family of the late Pa Okoh Monye of Aligwe Quarters, Owa Alero, Ika North East Local Government Area of Delta State.

What schools did you attend?

I started primary education in 1952 and finished in 1958. I started secondary education in 1959 at C.M.S. Modern School, Agbor, Delta State and completed it in 1961. Thereafter, I was employed as a teacher at C.M.S. Primary School, Alihiagu in 1962. In April 1963, some of my colleagues and I were laid off because we were not Grade 2 teachers.

When were you enlisted into Nigeria army?

On September 27, 1963, I joined the Nigeria Army in Ibadan, Oyo State and was sent to the Nigerian Army Depot for recruitment training where I underwent a six-month recruitment course. I passed out in April 1964 and was posted to 2nd Battalion, Abeokuta. In August of the same year, the whole battalion was moved to Ikeja Cantonment, Lagos State.

I served under three senior officers who later became Military Heads of State and presidents of this country, one of whom is Nigeria’s incumbent President, Muhammadu Buhari.

What was your experience in the army?

In January 1966, while still at Ikeja Cantonment, I was given 19 days off to take the London General Certificate of Education examination. On January 15, 1966, the coup led by Major Chukwuma Kaduna Nzeogwu took place. On September 15 of the same year, there was a counter-coup led by some Hausa soldiers but spearheaded by Gen. Murtala Mohammed.  There at the barracks, the Hausa soldiers began to shoot and kill Igbo people. And because many of them thought I was an Igbo man, I was shot in the hand and taken to a guard room. There were many of us in the ‘guardroom’ (common term for small cell). Igbo, Yoruba and soldiers from other ethnic groups were tortured and brutalised.

How did you escape?

On the 10th day of our incarceration, while we were waiting to be executed, Ahmadu Finger came and assured me that nothing was going to happen to me. He convinced other soldiers that I was not Igbo but a Mid-Westerner. That was how I escaped being killed. Shortly after Ahmadu Finger left, Lieutenant Mohammed Nasarawa came and called out names of those to be released and I was among them.

After we were released, Maj. Gen. Yakubu Gowon visited the 10 of us and told us not to run away but stay and work with other soldiers. The next day, nine out of the 10 of us that were released ran away.  They could not trust them due to the inhuman treatment meted out to us.  But I decided to stay back because of my love and zeal to work for my fatherland.

Some months later, some other soldiers and I were taken to Kaduna but I was not comfortable being alone in the midst of people who wanted me dead. So, I went to plead with the then commander, the late Capt. Isah Buka, who was later executed during the coup led by Buka Suka Dimka, to give me an official posting to Benin but I was denied with a stern warning never to make such a request again or risk being treated as an Igbo man.

We were still in Kaduna when Gen. Gowon created 12 states to replace the regions in 1967 by a military decree. In the same period, Chukemeka Ojukwu declared Biafra. I fell ill and was taken to a military hospital where Nigerian Army and Air force doctors attended to me but I never got better, so I was then taken to one Dr. Oshodi, who diagnosed my condition to be psychological and recommended in a letter to the commander that I should be posted to a more convenient place. The commander called me to commend my courage and assured me that he would write to the record officer at Apapa, Lagos to repost me officially to Benin.

While waiting for my posting, it was announced that my battalion was moving to the boundary.  I was expecting to be among the ‘Rear Party Men’ (aged and sick soldiers who normally guarded the barracks when the soldiers were out to fight) but unfortunately, when the list of Rear Party Men came out, I did not make the list.  I felt so bad because I needed to take care of my health.

What did you do?

I approached Muhammadu Buhari, who was the adjutant then (an adjutant is a military officer who acts as an administrative assistant to a senior officer) and told him that I was sick and was waiting for my posting letter. Buhari told me it was too late. So, I had no choice but to move with the battalion to the boundary between North and South and settled in Adikpo village located in the present Benue State.

When were you commissioned as Lieutenant?

After I passed the examination in Enugu, I was taken to Lagos for the final one, which was organised by Olusegun Obasanjo and I also came out with flying colours. With this result, I was admitted into the NDA in 1968 to begin the Officers’ Course.  I passed out in August 1969 and was commissioned as Second Lieutenant. Thereafter, I was posted to 3 Marine Commando in Port Harcourt, where I met Obasanjo as my General Officer Commanding. Obasanjo was a Colonel then.

When did you retire from the army?

I was unjustly dismissed. While I was a captain, there was an allegation of embezzlement of funds meant for the soldiers levelled against the brigade major of the battalion, a captain, who was our superior via a written petition by some soldiers, claiming that he embezzled the money given to him to share to the soldiers.

Unjustly, three officers from the South-South who had nothing to do with the said embezzlement, including me (Delta State) and two other colleagues were dismissed from the army unceremoniously in 1975.

What are your regrets?

This is one of the greatest injustices I have received in my life from a country I risked my life to serve. Every effort made to prove our innocence regarding the allegations failed as they didn’t listen to us.  We had no godfather to support our appeal. We had no other choice but to return to our various homes without compensations or support of any kind.

What have you been doing since you left the service?

Battered by war expeditions, injustice and denial, I have been at my native home, Owa Alero. I feel neglected, dejected and depressed. I have been begging to eat despite fighting in the Nigerian Army and attaining the rank of a captain and becoming a battalion commander.

I engaged in the business of buying and selling but it has not be easy until I started having eyes problems some years ago.

What efforts have you made to see the President, Major General Muhammadu Buhari (retd.) to revisit your matter?

When Buhari was the Head of State between 1983 and 1985, I made efforts to see him as my former boss but before I could raise funds to visit him, Gen. Ibrahim Babangida’s coup had got him out of office.

I later visited Buhari in Kaduna where we discussed at length in his living room.  During that visit, Buhari who knew my labour, efforts, the risks I took to keep Nigeria as one and the truth about my unjust dismissal from the army, urged me to keep the communication channel open by visiting him regularly as he would love to work with me in the future as if he knew he would pilot the affairs of this nation later.  Since then, I have not been able to visit him for lack of funds and connection.

How about your wife and children?

I got married on October 1, 1971, to my beloved wife, Elizbeth Chinedu Monye, who is from Ngwa, Abia State. Unfortunately she died in October 2019. I had six children – three males and three females but I lost all my three sons because of lack of funds to provide them the necessary healthcare. Also, I lost my first daughter to high blood pressure. So, I’ve lost four children.

How have you been coping now?

It has been very difficult. We have no house of our own and cannot rent a place because of lack of funds. I live in a one-bedroom apartment given to me to stay by one of the persons whom I was good to while I was in service. There is no bed, so I sleep on a couch, which is the only piece of furniture I have.

Where are your two surviving children presently?

They are with me, still struggling to survive. They have degrees in engineering and computer science but they are jobless.

What do you want the government to do for you?

I am appealing to the three generals I served under – retired General Gowon, retired General Obasanjo and President Buhari to come to my aid. I thank God that they are still alive and strong. They knew all I went through at the front to keep Nigeria one.

I’m also appealing to well-meaning Nigerians to come to my aid and not to allow to me die in this condition. I desire to have a house of my own and a means of livelihood.

I risked my life for this country. I took bullets so that my country could be saved from disintegration. The reward I got was unjust dismissal. I feel dejected and abandoned. Currently, my eyesight is bad and I cannot even cross the road without being aided.

I need to have an eye surgery which the doctor said will cost me N800,000 but I can’t afford it. I don’t even have money to buy eyeglasses. I beg to survive. I don’t even have a bed to lay my head. I’m old but I sleep on the chair every day. I do not know where my next meal will come from. Please, I am begging in the name of God, help me and rescue me from this suffering.

President Buhari assured me when I visited him many years ago that he would help me. I know that if I have the opportunity to see Buhari today, things will change. My problem now is how to get the connection and money to needed to get to him. I pray that President Buhari will read this interview.

Today, many people who took vows to die for their fatherland are ravaged by poverty and there is no help from the government. The fourth and fifth lines of our National Anthem say: “The labour of our heroes past, shall never be in vain…’’ but my own labour seems to be vain.

Peter Obi: An electoral choice made easier By Tochukwu Ezukanma

New Excerpt from Eating Tomorrow: Hogging the Gains from Trade in Mexico By Timothy Wise

Peter Obi: An electoral choice made easier By Tochukwu Ezukanma

New Excerpt from Eating Tomorrow: Hogging the Gains from Trade in Mexico By Timothy Wise